The excursion to Dolphinarium from Hurghada allows you to see the marine mammals show. This show presents the most extensive collection of marine creatures in Egypt. You will see black-sea dolphins, northern fur seals, South American sea lions, and Pacific walrus during the show.

ONLINE BOOKING DOLPHINARIUM EXCURSION HURGHADA AND BEST PRICE! It is a favourite entertainment excursion to Dolphinarium in Hurghada, Egypt! We recommend the trip because it allows tourists of any age to have a good time seeing the most extensive collection of marine animals. Besides, it gives the chance to take a picture with them. Indeed, it is one of the loveliest entertainment programs in Hurghada!

Highlights on Dolphinarium Excursion from Hurghada

Program of the Trip to Dolphin World

What does the Price of Dolphinarium Excursion from Hurghada Include?

What does not Program of Dolphinarium Hurghada Include? 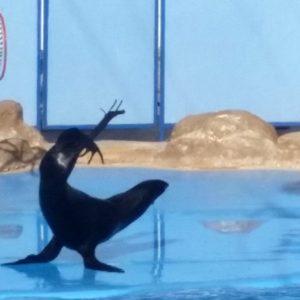