On tour to Cairo from Hurghada, you will see the great Pyramids of Giza and the Sphinx. Next, you will enjoy lunch. Following lunch, you will visit the Egyptian Museum. There are about 100 exhibition halls in this museum. These halls home a unique collection of about 150 thousand pieces.

By the end of this excursion, you will be able to make a Nile trip for an extra charge. The trip price includes entrance tickets and lunch.

It is a beautiful trip to Cairo – Giza from Hurghada, Egypt! We recommend the excursion because it allows tourists to see the most impressive sights constructed during Ancient Egypt. Additionally, it will enable tourists to learn more about the history of the country. Undoubtedly, it is one of the most popular Hurghada tours of the pyramids! ONLINE BOOKING GIZA CAIRO EXCURSION HURGHADA AND BEST PRICE!

What does the Price of Cairo & Giza Excursion Hurghada Include?

What does not the Program Cairo & Giza Excursion Hurghada of include?

What to take with you for the trip to Cairo – Giza?

What is Expected to See during the Giza Cairo Excursion Hurghada?

The Giza Pyramid Complex is the most popular tourist attraction in Egypt. This Complex is an Ancient Egyptian site located on the Giza Plateau. Widely known, it includes the Great Pyramid of Giza with its associated networks and Sphinx of Giza. Also, we call it the Giza Necropolis.

The ancient Egyptians built these massive constructions during the Fourth Dynasty of the Old Kingdom of Ancient Egypt. Additionally, the Giza Complex includes several cemeteries and the remains of a workers settlement on its territory.

The Pyramid of Khufu stands at a towering height of 138.5 metres. Located in the Giza pyramid complex, this oldest and largest Pyramid has astounded people through centuries. This marvel constitutes a part of the Seven wonders of the ancient world.

The Pyramid Of Khafre stands at the height of 448ft with a base length of 706ft. These measurements make the Pyramid the second tallest and second-largest of the Giza Pyramid complex. This historical monument is also known as the Pyramid of Chephren. It houses the tomb of the Fourth-Dynasty Pharaoh Khafre, who ruled between 2558-2532 BC.

The Great Sphinx is one of the most significant sculptures in the world. It stands at nearly 66 feet, showcasing a reclined lion’s body and a human head. The length of this magnificent statue is around 240 feet. A royal headdress adorns the Sphinx’s human head. 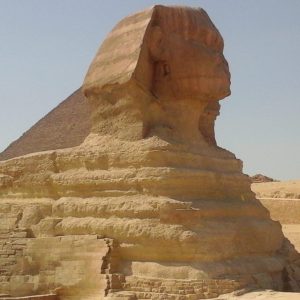