On the two-day excursion to Cairo/Alexandria by bus from Sharm El-Sheikh, we will see the three pyramids at Giza. Then, you will have lunch. After lunch, optionally, you can choose to make a boat picnic by the Nile River. Next, you will visit the Egyptian Museum in Cairo. Then, you will have a stop at the perfume factory, where all comers will be able to buy souvenirs. In the morning, you will head to Alexandria. There, you will see the palace of the king of Egypt in Montaza and the fortress of Qaitbay. After that, you will have lunch in a fish restaurant. Following lunch, we will make a city tour to visit the Roman Amphitheater, the Alexandrian Library and the most famous mosque of the city_ Abu Abbas.

It is an intensive excursion program to Cairo and Alexandria from Sharm El Sheikh, Egypt! Firmly, we recommend the tour as it allows tourists to enjoy the most impressive sights. These attractions exist in three different cities – Cairo, Giza and Alexandria. In the cities of Cairo and Giza, you can visit the ancient Egyptian monuments. While in Alexandria, you see the sights of the Roman Empire and the modern period. All this allows you to learn more about the history of Egypt and receive many impressions. ONLINE BOOKING CAIRO ALEXANDRIA EXCURSION SHARM EL SHEIKH AND BEST PRICE!

The first-day program in Cairo:

The second-day program in Alexandria:

Program of the Two-days Excursion to Cairo-Alexandria

What does Cairo & Alexandria Excursion Sharm El Sheikh Price include?

What does not Cairo & Alexandria Excursion Sharm El Sheikh Program include?

What to take with you for the tour?

What is Expected to See during the Cairo Alexandria Excursion Sharm El Sheikh?

The king’s palace stands in Alexandria. And King Farouk continuously filled it with new and unusual buildings. As Strabo said in “Geography”: “Each king, out of his love for pomp, usually added some decoration to all monuments.” A wall surrounding this chic royal district surrounded the fashionable neighbourhood like a fortress; the royal guard also guarded it. The guard chambers laid not far from the Montaza palace itself.

The Library of Alexandria is one of the largest and most important libraries in the entire ancient world. It was part of the Alexandria Muséion Institute, found in Alexandria, Egypt. The idea of ​​establishment belongs to Demetrius of Phalerum. At the same time, the son of Caesar Ptolemy II completed the building. Subsequently, Ptolemy I Soter laid down the plans for this monumental project. By then, the library rapidly accumulated a record number of papyrus scrolls. Indeed, the large amount of finance given by the Ptolemaic kings enhanced this process. It is challenging to calculate an exact figure for the number of scrolls stored at this place. However, we can assume the approximate number of scrolls varied from 40,000 to 400,000 during the heyday.

The Egyptians completed the construction of the Fortress in 1477. The founder of this fort was Sultan Abu Al-Nasr Sayf ad-Din Al-Ashraf Qaitbay. Historians believe Qaitbay had built this fortress on the Alexandria Lighthouse – one of the Seven Wonders of the World. These historians affirm that the Alexandria Lighthouse exited on the same site. They used the remaining parts of the lighthouse itself to build this citadel.

Abu El Abbas Mosque is very popular and famous in Egypt, in the city of Alexandria. The Egyptians dedicated this mosque to the holy Sufi Abul-Abbas al-Mursi from Spain, who lived in the 13th century. In his last years, he moved to live in Alexandria. The full name of this Sufi is Shahab ad-Din Abu-l-Abbas Ahmad ibn Umar ibn Muhammad Al-Ansari Al-Mursi. Revered Abu El Abbas is one of four religious men who enjoy high respect and wide fame in Egypt. His writings were rife and were of considerable importance to all the people in Egypt. Mursi has become a household name in the country, thanks to his work and popularity. 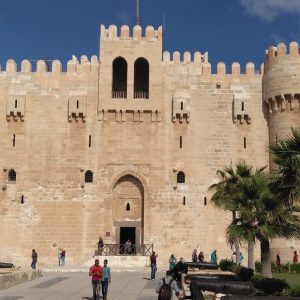 You're viewing: Cairo Alexandria Excursion Sharm El Sheikh £151.00
Rated 5.00 out of 5
Add to cart
%d bloggers like this: