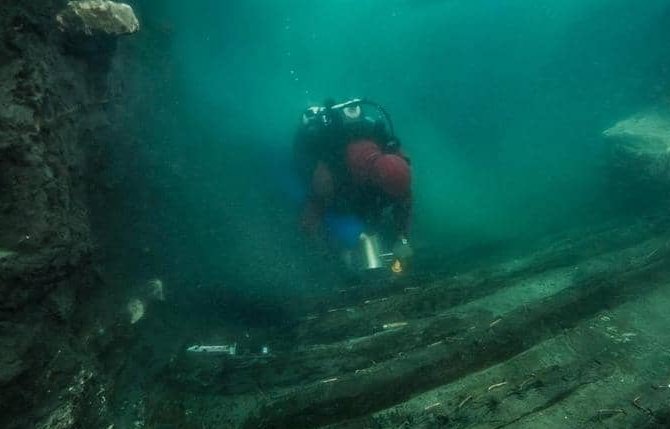 The discovery of the Ptolemaic era warship in Abu Qir Bay is one of a series of discoveries in the same place. The Egyptian-French archaeological mission of the European Institute of Laurel Archeology (IEASM), working in the underwater city of Heraklion in Abu Qir Bay – Alexandria, found the wreck of a Ptolemaic-era warship equipped to sail in the Nile River. Also, it found the remains of a Greek funerary area dating back to the beginning of the fourth century BC.

Mustafa Waziri, Secretary-General of the Supreme Council of Antiquities, said the ship was to dock in the canal flowing along the upper face of the Temple of Amun. However, this ship sank due to the temple’s collapse by a devastating earthquake. Subsequently, the temple’s destruction caused the fall of huge blocks during the second century BC. For fortune, the fall of those stone blocks helped to keep the ship down the deep channel, now littered with temple wrecks.

Ayman Ashmawy, head of the Egyptian Antiquities Sector, explained that IEASM discovered the wreck of that ship under nearly 5 meters of solid mud. This mud represents the seabed and is mixed with the temple’s remains. He added that the IEASM used underwater excavation devices such as sub-bottom profiler devices to find it.

While Frank Goddio, head of the mission of the European Institute of Sunken Archeology (IEASM), stressed that the discovery of fast ships dating back to that time is still very rare. He added that the Greek ships of this type were utterly unknown until the discovery of the Punic ship Marsala (235 BC). This Punic ship is ” Our only example.

He added that preliminary studies indicate that the ship had a length of more than 25 meters. However, the hull was built according to the classical style that relies on the docus-and-deck technique. Yet, this style retains the characteristics of the ancient Egyptian one. Therefore, it represents a mixed type of construction.

The ship was a flat-bottomed one and had a flat beam, a valuable model for navigation in the Nile and the delta, and had oars with a large sail, as indicated by the shape of the mast of significant dimensions.

As some typical features of shipbuilding in ancient Egypt indicate, as well as evidence of the reuse of timber. This is enough evidence that the sailors built this ship in Egypt.

Ehab Fahmy, head of the Central Department of Sunken Antiquities, said that the mission succeeded in finding the remains of a Greek funerary area. This area dates back to the beginning of the fourth century BC and lies at the entrance to the northeastern canal of the city. This discovery points to Greek merchants who lived in that city and controlled the access to Egypt at the mouth of the town – the Canopic branch of the Nile.

He pointed out that they were allowed to settle it during the late Pharaonic era, and they set up their funerary temples near the main temple of the god Amun. But, due to natural disasters, the area witnessed destruction. Accordingly, the mission found the archaeological remains mixed with a stable Amun temple in excellent condition in the deep channel during the land subsidence caused by the phenomenon of Earth’s fragility.

He stressed that these monuments are an indicator of the richness of the temples of that city. The place is now under the surface of the Mediterranean Sea, 7 kilometres from the beach of Abu Qir.

It is worth mentioning that the city of Heraklion was, for centuries, the largest port in Egypt on the Mediterranean. It played this role until the founding of the city of Alexandria by Alexander the Great in 331 BC. Several earthquakes, followed by tidal waves, caused the fragility of the land and the collapse of a section of about 110 square kilometres of the Nile Delta. As a result, the cities of Heraklion and Canopus sank under the sea. The European Institute of Sunken Archeology (IEASM) rediscovered the two towns in cooperation with the Central Department of Sunken Antiquities at the Ministry of Tourism and Antiquities from 1999 to 2001.